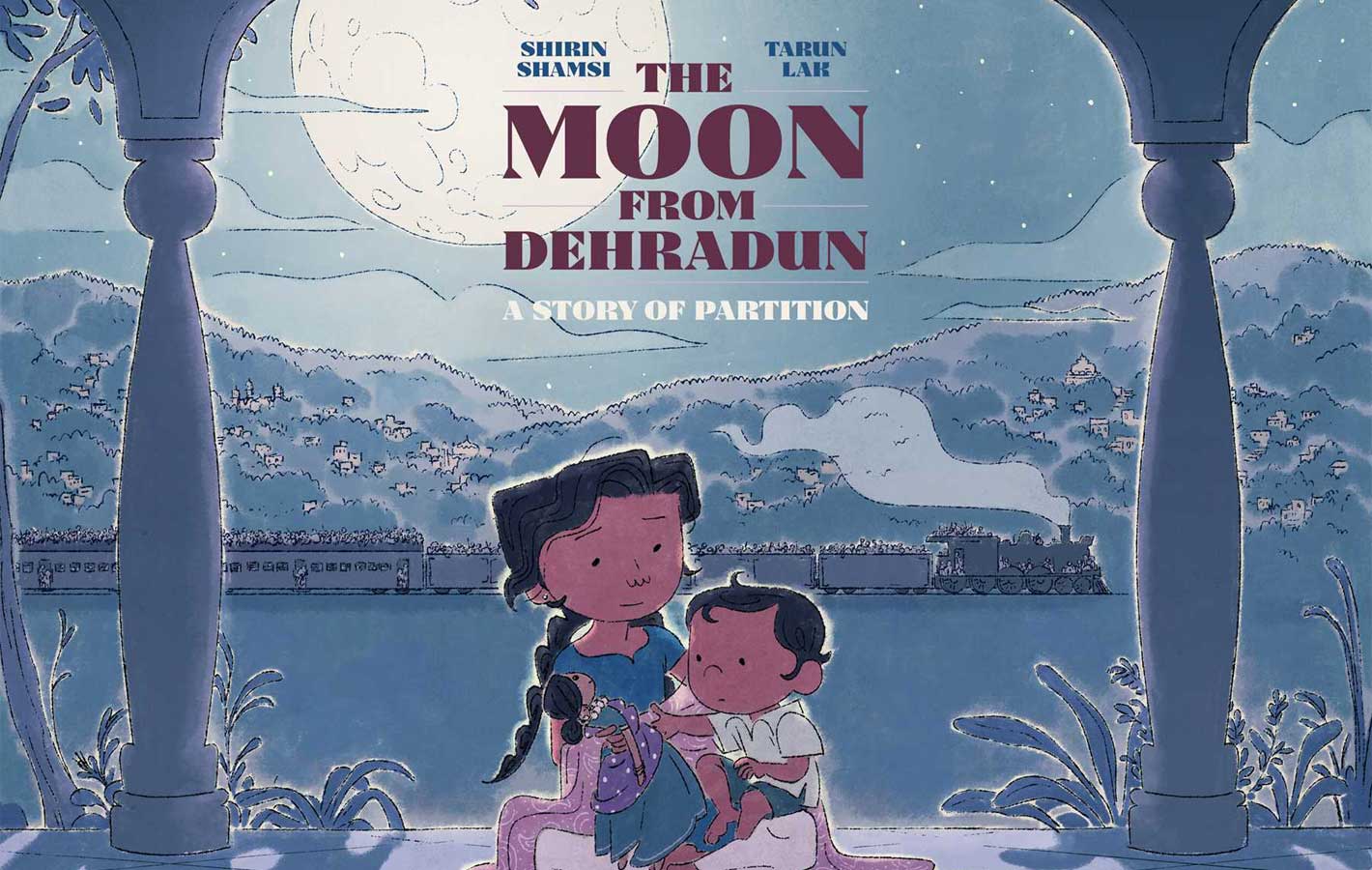 Q & A session with Shirin Shamsi on the Moon from Dehradun

Seventy-five years ago, Partition displaced more than 15 million South Asians: Muslims to West and East Pakistan (now Bangladesh) and Hindus and Sikhs to India. In her picture book The Moon from Dehradun, Shirin Shamsi shares her mother’s Partition story—of Azra, who accidentally leaves her doll, Gurya, in Dehradun as her family makes a harrowing overnight journey to Lahore—with the youngest readers. “Partition is the largest forced migration in history, and yet so few people have heard of it,” Shamsi said. “Many friends have reached out to me now that they’ve watched Ms. Marvel, and said, ‘I didn’t know anything about this!’ I’m glad people are learning about it.”

The book is illustrated by Pixar animator Tarun Lak, who brought his own perspectives to bear on the text. “I grew up in India, and the history and the effects of Partition are something that we live with,” he said. “Working on this book was about better understanding the place I come from.” PW spoke with Shamsi and Lak about their craft, research, and representing the weight of history.

What were the challenges of getting the words on paper?

The challenges were to convey the story in an authentic way, and from a child’s perspective. When I decided to become a writer many decades ago, I knew I wanted to tell my mother’s story, but it weighed so heavily. It overwhelmed me. I’d heard my mother’s story, but I knew I couldn’t write all the tragedy, because that would just be too heavy for a child. At the same time, I wanted the background history, because that was very important to me. When I dug deeper, I realized that this was just one story. There are millions of stories that were never heard. So many people have passed away and carried their stories with them. The world needs to know these stories. I wanted my own children to know them, because there’s a whole generation that didn’t speak of this because of that intergenerational trauma.

Did you always know you wanted to tell your story in picture book form?

Definitely, because I knew that going into too much detail would probably take its toll on me emotionally. I don’t think I have that capacity to write such a traumatic story with so much depth. With picture books, you can write important, emotional stories with pictures complementing them. I love the form.

In what ways did you and Tarun collaborate?

He reached out to me and asked me if I had photographs of my grandparents. He sent me a list of specific questions, like what kind of clothes they wore. When I saw his first sketches, especially of the father character, I just cried because it reminded me of my Nana. I cried many times while writing the story, and then again, seeing Tarun’s illustrations. They are packed with movement and emotion.

What are your hopes for young people and their families as they read this book?

As I was researching, I talked to friends whose families migrated to India and yet our stories were identical. In the last spread, I wanted to convey that we eat the same food, speak the same language, and wear the same clothes. And yet this hatred—where did it come from? It’s heartbreaking. In 75 years, there’s still mistrust, yet we are neighbors and we are kin. I hope my stories can be a bond and bring people together.

Have you always wanted to illustrate a picture book?

My core interest was always in film, but I drew a lot as a kid. The subject matter of this book drew me in. It’s a personal story set in this very important historic time that has affected India and Pakistan in a very direct way. I had first studied Partition in school, but now as an adult, I understand the weight of it much more significantly.

What was it like to think about a story in pages and spreads, instead of frames?

I was skeptical at first, but I found it to be fairly similar. Film is a moving medium, but I think in images and how I use movement through those images. Even though there’s no movement in picture books, I’ve found my understanding of timing and movement in film helped me in pacing. I used more visual information to slow the reader down or varied the structure of the image itself so that the reader could move through it quicker.

The book includes illustrations of iconic images—of people fleeing on the tops of trains. What were your inspirations?

I did research without doing too much artwork, so that I didn’t get tied down to some of my own ideas before I did the homework. I watched films—like Earth with Aamir Khan, and Sardar Udham, which was partially set in Punjab during the freedom struggle—getting inspired by how they composed images, the details on screen, the time period of architecture, and sort of the mood they were able to capture. I read a lot of articles and gathered pictures from that time.

The book ends with a wordless spread. How did you come to that ending?

That was the hardest spread to draw because it is wordless. I wanted to mirror the main character’s experience with the girl who found her doll. I struggled with what I was really trying to say: Is it about India and Pakistan’s lost connection? Is it about the land that’s been split? There were several iterations of the spread before I landed on the two girls on their verandas. The story starts at dusk, and then is about the roller coaster of traveling across the border into a newly formed country. It’s subtle, but there’s a sunrise on that last spread to signify that this is a new beginning for them, and it is also about not forgetting their past.